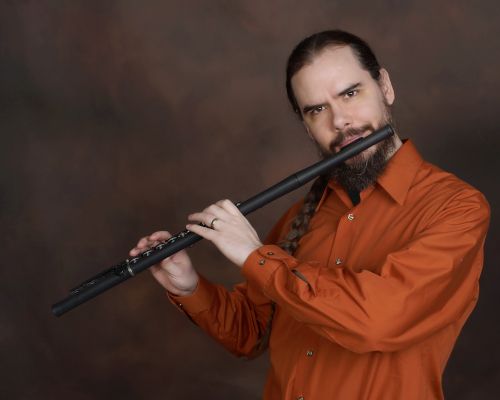 Earth Song – Flute Choir (2021)
Piccolo, 3 flutes, Alto, Bass, Contrabass (optional)
Dedicated to the Madison Flute Club on the Occasion of its 20th Anniversary Celebration, Earth Song is, primarily, music about music, about the act of coming to together to play the flute. Some years in world flute circles sold me on the “power of the pentatonic scale.” Earth Song opens with a sweeping melody reminiscent of folk music. This gives way to a different treatment of the pentatonic scale, a fugue loosely inspired by Mbuti melodies. The subject, felt in 10/8 time, is superimposed over a 5/4 pulse for a lively, syncopated dance.
Madison Flute Club Premiered Earth Song at the National Flute Association August 12th, 2022.

Winter Scenes – Flute Quartet (2019)
3 flutes (one doubling on piccolo) and Alto
In three movements, Winter Scenes begins with a pleasant walk. Once familiar landscape is now beautiful but alien under a fresh coat of snow. The second movement is a snowstorm or winter wind fugue which leads directly into the finale, a reprise of the opening scene but further changed by the wind and blowing snow in the piccolo.
Played here by Brenda Moats (Saskatoon Symphony): movement 1, 2, 3.

River Water – Flute Choir (2017)
Piccolo, 4 flutes, Alto, Bass, Contrabass
River Water is a setting of the Liaoning Chinese melody Jiang He Shui. This piece, made popular on the erhu, tells the sad story of a woman mourning by a river. This setting was premiered by the Adult Choir of the Madison Flute Club.
Played here by the New England Flute Orchestra of Indian Hill video engineer: Nicole O’Toole.

The morning rain of Weicheng dampens the light dust,
The guest house is green with the color of fresh willows.
Let’s finish another cup of wine, my dear sir,
Out west past the Yangguan, old friends there’ll be none.

In this setting I tried to contrast the imagery of the desolate Yangguan landscape with soft and tender feelings for the departing friend. The piece was premiered by the High School Choir of the Madison Flute Club.

Flight Of the Oarfish – Flute trio (2018)
3 C flutes
This trio began as attempt to create a new, original melody in the style of some of the traditional Chinese melodies I was studying at the time. At least one Chinese musician has told me I’ve succeed. Though I’m not aware of any Chinese legend concerning an oarfish, they look like magical creatures to me, real life Chinese dragons. There is a Japanese myth about the ones that wash up on shore, that they are sent by a water dragon to warn people of impending disaster. At first I thought that subject a bit dark for this piece, but then I looked at the beaching of the fish as a transition, a transformation. When the piece begins the oarfish is as home in the deep ocean, for the fugal development it begins its ‘flight’ up into the shallows. At the return of the opening melody the oarfish’s flight is complete and it swims comfortably in the celestial realm.
Played here by Ty and members of the Madison Flute Club February 2020. This piece is not yet published, email Ty for more information.

A Red, Red Rose – Flute Choir (2012, arranged 2017)
4 flutes, alto, bass, and a featured alto and bass flute solo
This arrangement of my earlier choral work for flutes is a bit low flute heavy. C flutes are only in 2 parts much of the way through while the featured low flute solos are exposed. An ideal ensemble to realize this setting might be of mixed skill levels so the C flutes could be comfortable with the extra support while the soloists strike out on their own. We read this setting at the 2017 NFA Convention.

Here is a winter/holiday piece arranged for flute quartet/ensemble with piccolo read by members of the Madison Flute Club:

I premiered these duet settings with another member of the Madison Flute Club in 2018, enjoy:

I reset some traditional texts to a new melody for my wife, Marién, when we were doing the long distance relationship thing and premiered the TTBB setting with the Madison Men’s Choir. I later arranged it for full choir and again for flutes.

I set this Carmen aria for choir in 2004 and made substanital revisions in 2019.

I set this standard for the UW Men’s Choir. For the premiere we doubled the bass line on a string bass and that performance was captured on YouTube.

For this setting I was heavily influenced by some spiritual settings of Moses Hogan’s I’ve sung. I tried to do a similar treatment here but with a standard. This setting was read by the UW-Madison Concert Choir.

I premiered this folk tune setting with the UW Men’s Choir.

Passacaglia (2020)
unaccompanied flute
Thinking about unaccompanied solos in the 2020 pandemic and I looking to the past for inspiration, I wrote and performed this Passacaglia for unaccompanied flute. The lone flute has quite a bit to do here keeping the ground bass going for entire piece while playing different lines of counterpoint above it. I innovated a bit in the form by displacing the ground bass one beat in time to create contrasting middle section.